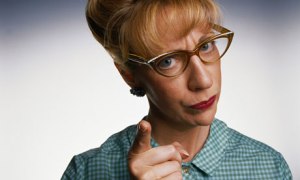 “Shape up!” “Get it together!” “Turn your life around!” “Stop!” Whatever the specific statement might be, we frequently hear messages that are directed toward our behavior. And, the result is inevitably the same … we feel either guilt over our inadequacies or we get pumped up into thinking that we can do it (whatever “it” is). Both responses leave us in the kingdom of self rather than the kingdom of God.

One of the fundamental miscalculations one can make it to think that God’s primary concern is for us to behave properly. And/or, we might also believe that the essence of Godly living is to do things for God. However, as Dwight Edwards shares in his book, Revolution Within:

“God’s first calling on our lives is not usefulness. It is intimacy. Like the first disciples, Christ’s premier purpose for our lives is for us to be “with Him”. Secondarily, very secondarily; He then sends us “out to” minister. How easily we lose sight of this!”

Good behavior is not the point. Doing things for God is not the point. We get mixed up on this distinction because of a misunderstanding of the nature of sin. Sin is not doing bad things. Sin is living independently of God. We were created to live in dependent, moment by moment connection with God. Sin entered into the world, not when Eve ate the fruit in the Garden of Eden, but when that dependent, trust in God was broken. This is why “sin” is said to have entered into the world through Adam. (cf. Romans 5:12) Rather than continuing to trust God together, Adam remained silent when Eve took the fruit. His silence was the behavior that resulted from breaking into independence.

Oswald Chambers notes: “Sin is a fundamental relationship— it is not wrong doing, but wrong being— it is deliberate and determined independence from God. The Christian faith bases everything on the extreme, self-confident nature of sin. Other faiths deal with sins— the Bible alone deals with sin. The first thing Jesus Christ confronted in people was the heredity of sin, and it is because we have ignored this in our presentation of the gospel that the message of the gospel has lost its sting and its explosive power.”

What makes something righteous or sinful? The heart from which it is done. I can tell you that I love you and complement you about how wonderful you are, and that may seem like a great thing to do. However, if I am doing that because I am trying to manipulate you to get something I want, it is not righteous but sinful.

So, why do we so often look to good behavior as the measure of our existence? Quite simply, behavior is manageable and definable. If behavior is the point, then we can remain in control of our lives. We still call the shots. If we don’t agree with God, we can ask for forgiveness later. And, even if we can’t really manage behavior, we can make it appear so.

Sin is about relationship. So is righteousness. Relationship with God is not manageable or definable and sometimes it is just plain mysterious. The very fact that we like to be independent is the reason that we are drawn to behavior rather than intimacy with God. We want answers and formulas and predictability. Relationship offers none of those things. And yet, it is relationship for which we were created.

Another reason, we might be more drawn to behavior is because we have a tendency to be impatient. Relationship takes time and develops fruit over time. Relationship demands all of us, not just our behavior. A. W. Tozer suggested that:

“One marked difference between the faith of our fathers as conceived by the fathers and the same faith as understood and lived by their children is that the fathers were concerned with the root of the matter, while their present-day descendants seem concerned only with the fruit … we demand the fruit immediately even though the root may be weak and knobby or missing altogether. Impatient Christians today explain away the simple beliefs of the saints of other days and smile off their serious-minded approach to God and sacred things … we’ll imitate their fruit without accepting their theology or inconveniencing ourselves too greatly by adopting their all-or-nothing attitude toward religion.” (The Root of the Righteous)

True righteousness (dependent relationship with God) grows over time and is often misunderstood. Several years ago I bought a fruit tree at a local nursery that was on sale for $5. It was a pitiful looking tree that was in no shape for bearing fruit, but I planted it and began to nurture it so that it could “take root.” I remember a friend coming over for dinner and sarcastically asking who planted the “Charlie Brown Christmas Tree” in our yard. It took time but just 5 years later, the tree produced so much fruit that we were giving buckets away to friends. If I had merely focused on the behavior of the plant in those first years, I would have been discouraged and might have even gotten rid of it. However, I pruned it (cf. John 15:2), watered it, and joyfully discovered that it bore fruit when the time was right.

Mystical writer Pierre Teilhard de Chardin suggests patience as well … “Above all else, trust the slow work of God. We are quite naturally impatient in everything to reach the end without delay. We should like to skip the intermediate stages. We are impatient  of being on the way to something unknown, something new. Only God could say what this new spirit gradually forming in you will be. Give our Lord the benefit that His hand is leading you, and accept the anxiety of feeling yourself in suspense, and incomplete.”

So, remember, God’s job is to change us and transform us and bear fruit in us. Our job is to remain connected to Him in relationship. And what is the essence of relationship but being together? God is with us. He is present. Are you remaining attentive and conscious of His presence in all things?

I live at the foothills of the Phoenix Mountains Preserve (in Arizona) with my incredible wife and our golden doodle (Fergus). We have two young adult children. I desire to live in the conscious awareness of the goodness and love of God every moment of my life.
View all posts by Ted Wueste »

Posted on October 22, 2014, in Uncategorized. Bookmark the permalink. Leave a comment.